Harbor WildWatch had a training session for its volunteers yesterday during low tide at Kopachuck State Park. We were surrounded by sea stars, sand dollars, crabs, sea urchins, barnacles, oysters, mussels, sea gulls, tube worms and kelp, sea lettuce, algae, and on and on. Lots of good stuff, but tonight's post will focus on:


SEA STARS!
(Sometimes called starfish, but they're not fish) 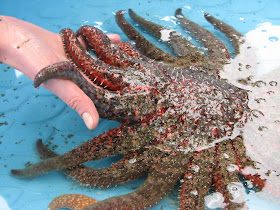 The big guy above and below is a sunflower star, the largest type of sea star in the world at up to 40 inches diameter. This one has 21 arms, but they can grow more than 24. They feel softer and squishier than some of the other stars, can move 6-12 feet a minute with the tube feet on their undersides, and will eat anything they can. Favorite foods are purple sea urchins, bivalves, sand dollars, sea cucumbers and other sea stars, but luckily ours didn't try to eat the smaller ochre star that shared its pool. Ochres, by the way, aren't always ochre colored. They can be orange, brown or purple. 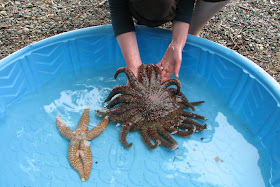 Below are a few more stars on the beach, where they were left when the tide went out. They can survive hours of exposure to air until the tide comes back in. Often you'll find them clumped together on rocks or pilings at low tide, but at Kopachuck they're scattered around the lower beach close to or in the water. 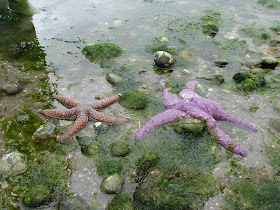 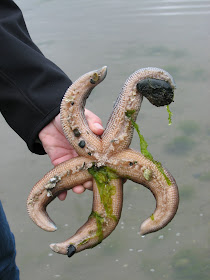 Above, you can see the underside of a star with seaweed and rocks still clinging to it. The underside is covered with tube feet that help it move and capture food.

COOL FACT: Stars use their tube feet to pry open the shells of bivalves and then squeeze their stomach inside and liquefy the unlucky animal. Then a second internal stomach digests the food. Clams, anyone? 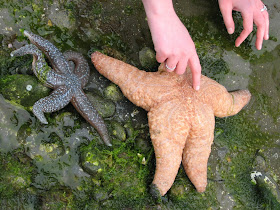 Here's another shot of that fat ochre star next to a smaller relative. The naturalist is pointing to the star pattern formed where the arms meet in the center. Stars can regenerate lost arms. 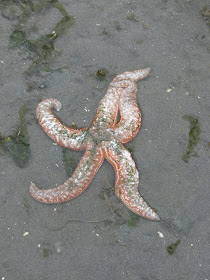 This one above is a mottled star, which is similar to the ochre except its center disc is proportionately smaller and the arms more slender.

Parting thought: Our naturalists have licenses to collect these critters for the Harbor WildWatch touch tanks, so don't go out and collect them on your own or you may run afoul of the authorities. We're careful to keep them cool, to return them in a few hours to the tidal zone in which they were found, and to only allow visitors to gently touch them with one finger. The reason we put them in touch tanks is to teach beach visitors about the local marine life.

And here is a parting shot of Kopachuck Beach on yesterday's gray Saturday afternoon with Cutts Island in the distance. 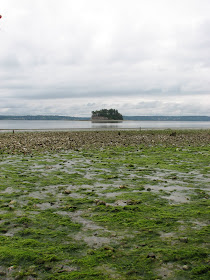 Tune in later this week for photos of sand dollars, crabs and who knows what else?


Have a colorful day
Sherrie Spangler at 9:40 PM